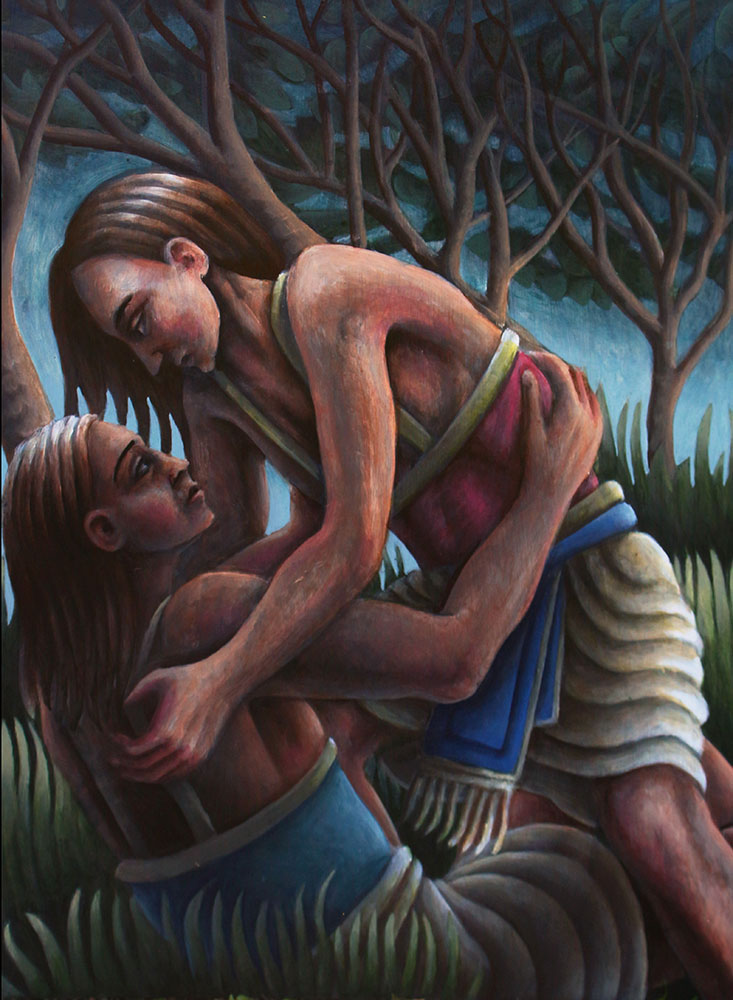 bataandanpu 80 by 60 cm acrylic on canvas. This painting gets its name from an Ancient Egyptian legend of two brothers. It was originally an autodrawing and immediately these two rather unusual men appeared in what could be rescue, murder or some kind of erotic act. Their expressions don't give away much, and for me I get the question of trust as a shout out. Popular media is currently awash with tales of relationship woe and betrayal, which I suspect that nearly all of us have to deal with at some point. Lines between assertiveness and agression, caring and obsessing, and the mere act of either moving into someone's personal life or letting them in will always be both terrifying and a risk. I sometimes feel that our tales of woe and attrocity discount the fact that relationships do rule you, and are easily a slavery when they are anything but happy. You have let someone in, very deep, and, don't kid yourself, let them guide your life. You've placed a great deal of your self worth in them, when it goes wrong, it will hurt, lots. No one can existentially question or hurt you like a lover. No one judge you in a way that can feel that final. The actual tale of Bata and Anpu features two brothers in a tale of woe largely caused by women, and has a mysogynistic feel. The tale starts with the elder brother almost murdering his sibeling, wrongly accused of adultery, but they end up showing a devotion to each other that is unmatched. I hope that the Egyptian theme here helps aid the confusion. I definately want the viewer to have to come to their own conclusion as to what the hell is going on.